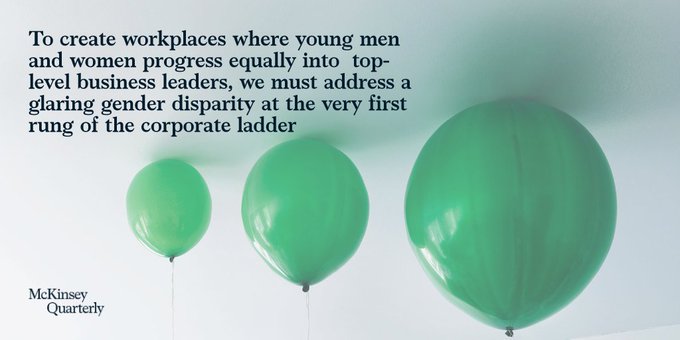 To achieve workforce parity, businesses should apply the same practices they are using against the glass ceiling…

Commitment to gender parity at the senior level in companies has been on the rise, and we are starting to see results. The average C-suite has 24 percent more women than in 2015. The share of open roles going to women is rising, through either promotions or hiring.

That progress engenders more progress: C-suite members have an outsize impact on promoting diversity and inclusion in their companies. They also are visible role models to other women coming up the ranks.

Still, we shouldn’t confuse progress with parity. To create workplaces where young men and women progress equally into top-level business leaders, we must address a glaring gender disparity at the very first rung of the corporate ladder. While women account for 48 percent of entry-level hires, they account for just 38 percent of first-level managers, according to the 2019 Women in the Workplace study we at McKinsey developed together with LeanIn.Org

Let that soak in for a moment. That collective stumble on the first step up the corporate ladder suggests that over the next five years, one million women in corporate America will get stuck at the entry level while their male counterparts move into promising career paths. That is equivalent to nearly 25 Major League Baseball stadiums full of women.

It gets worse. The fact that all these women are getting stuck or left behind early in their careers results in today’s unbalanced talent pipeline—women account for just 30 percent of all vice presidents, versus men at 70 percent.

Remedying problems at the beginning of the talent pipeline might be the key to turning incremental gains into explosive ones. At the current pace of change, we will bridge the gap at the first promotion rung in 30 years. If, on the other hand, we start hiring and promoting women into first manager roles at equal rates as men today, we could bridge most of the gap between entry-level and manager roles for women in just five years.

Companies have the tools to make this happen. We know this because they are using them to crack the “glass ceiling,” increasing the percentage of women at the very top. Now it is time to extend those practices to the rest of the organization. Across the companies we work with, three practices stand out.

To drive toward gender parity at a faster pace, companies must avoid tripping at the first step up. Luckily, most companies have the tools they need. If they apply measures that have been successful at the C-suite to first-manager promotions and hires, they can turbocharge efforts toward workforce parity.

This article originally appeared in the Wall Street Journal under the title “Remedies for early-career gender gap are already in companies’ hands.”